What Fraud Victims Should Know about Debts Not Discharged by Bankruptcy – False Pretences, Misappropriation of Trade Secrets and Breach of Confidence 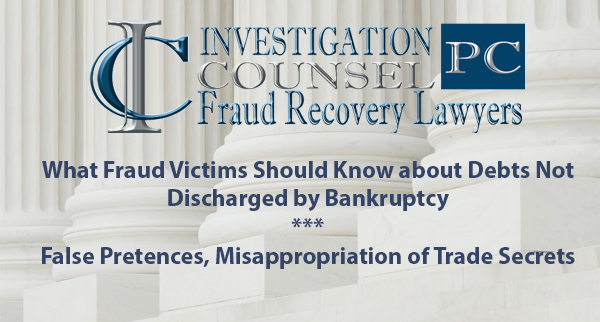 The case of Shaver-Kudell Manufacturing Inc. v. Knight Manufacturing Inc., 2021 ONCA 925, released December 29, 2021, addressed the issue of whether a judgment for misappropriated trade secrets and confidential information may be wiped away by a debtor with a bankruptcy application. The reason this decision is important is that it also discusses the scope of debts related to fraud that are not discharged from a bankruptcy.

It is commonly held that at the heart of the Bankruptcy and Insolvency Act, RSC 1985, c B-3, is the philosophy that bankruptcy legislation exists to encourage the rehabilitation of an honest but unfortunate debtor by providing, subject to reasonable conditions, a discharge of their debts. Section 178(1) provides for certain debts to survive bankruptcy as exceptions to the general principle, stemming from different policy considerations.

False pretences and fraudulent misrepresentation are closely connected terms with the same requirements. The core concept of making a deceitful statement applies to both. To the extent that they are not identical concepts, if any, it may be that fraudulent misrepresentation requires the creditor itself to have relied on a false statement made to it, while false pretences may extend to cases where a false statement was made by the debtor to, and relied on by, a third party, depriving the creditor of property to which it was entitled.

The story as set out in the Shaver-Kudell Manufacturing decision is that following a 13-day trial, the trial judge found the defendants Dusko Ballmer and Lucy Shaver, former employees of Shaver-Kudell Manufacturing, jointly and severally liable for misappropriation of trade secrets and breach of confidence. The trial judge awarded judgment of $307,028 and $83,493 for costs.

Dusko Ballmer and Lucy Shaver did not pay. Rather, they filed a Notice of Proposal to Creditors. As a result of their proposal being rejected, they were assigned into bankruptcy. They were discharged automatically like most bankrupts. The plaintiff company, Shaver-Kudell Manufacturing, then brought a motion seeking a declaration that the discharge from bankruptcy did not release Dusko Ballmer and Lucy Shaver from the misappropriation of trade secrets and breach of confidence judgment.

On December 9, 2020, the Ontario Superior released its reasons in the plaintiff’s motion that the judgment for misappropriation of trade secrets and breach of confidence survived bankruptcy, published as 2020 ONSC 7635. The Court ruled in favour of the plaintiff. Thereafter, one of the defendants appealed the decision to the Court of Appeal.

The Court of Appeal held that there was no suggestion by the trial judge that the misappropriation was committed by Dusko Ballmer and Lucy Shaver in a fiduciary capacity attracting s. 178(1)(d). Frauds perpetrated in a fiduciary capacity, whether or not a deceitful statement is made, are not discharged by a rogue’s bankruptcy.

In the Shaver-Kudell Manufacturing case, the Court of Appeal found that the motion judge erred because it took morally objectionable behaviour — misappropriation of trade secrets — and implied that Dusko Ballmer and Lucy Shaver had engaged in making deceitful statements. The Court of Appeal held that this approach did not respect the proper scope of s. 178(1)(e) – which is limited to deceitful statements as the source of the liability.

The problem with the BIA is that on one hand the philosophy that bankruptcy legislation is to encourage the rehabilitation of an honest but unfortunate debtor, implying that the dishonest debtors shall not be discharged from their dishonest debts. Yet the Courts have held that on the other hand, the BIA only identifies categories of specific wrongful or dishonest conduct by dishonest debtors.

Section 178(1)(d) provides that a debt is not released if it arose from fraud, embezzlement, misappropriation or defalcation while acting in a fiduciary capacity. A question that has not been answered by the Courts to date is whether a person who obtains property obtained by fraud, where the person is not the rogue who perpetrated the fraud, may be discharged from bankruptcy.

To state the problem more plainly, if a woman has obtained funds obtained funds from her husband, who obtained the funds by fraud in a trust based scenario such as his employment, and the woman is found liable for having knowing received funds obtained by fraud, might that woman be discharged of that debt through a bankruptcy application?

It would seem that a judgment for obtaining stolen property, whether based on actual or constructive knowledge of the underlying fraud, should be the kind of debt that should not be discharged as this conduct should be held by society to be morally corrupt. To state otherwise, the woman who is held liable for knowing receipt of funds obtained by her husband’s fraud should not be discharged.

Yet the black letter wording of the BIA would seem to discharge this type of debt – and the Courts would support this view. In the words of the Court of Appeal in Shaver-Kudell Manufacturing, “In the absence of deceitful statements from which the liability arose, the motion judge’s findings that the appellant is not an honest but unfortunate debtor, or that his conduct was morally objectionable, are insufficient to bring the matter within s. 178(1)(e).”

The Ontario Court of Appeal also held in their Shaver-Kudell Manufacturing decision that although lying on examination for discovery reflects on whether the appellant was honest, it is not the type of false statement that satisfies s. 178(1)(e). The Court held that by focusing on a lie told on examination for discovery, the motion judge failed to focus on whether false statements were the source of the liability. It is not a statement on the basis of which he obtained property or services. It could not make the liability one arising from obtaining property by false pretences.

It appears that at the core of the concept of false pretences is the making of a deceitful statement — that is, a statement that is false to the knowledge of its maker (including through willful blindness or recklessness). For s. 178(1)(e) to apply, the debt or liability to the creditor must have resulted from the bankrupt having obtained property or services by making such a statement.