by | | Practical Information for Fraud Victims About Fraud Recovery | 0 comments 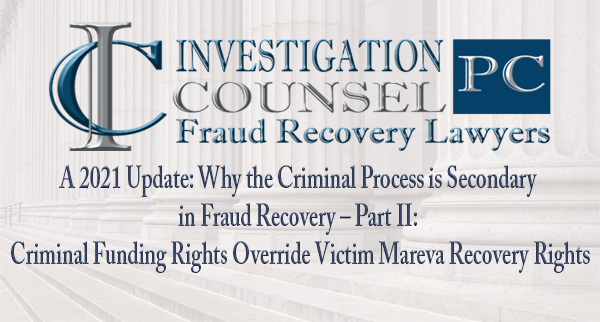 The recent Madan Family Fraud case by the Ontario government, released on December 24, 2020 and cited as Ontario v. Madan, 2020 ONSC 8093[2], demonstrates again why the preferred fraud recovery strategy is to use civil proceedings to obtain a judgment and recover all assets from rogues before filing a criminal complaint.

To state otherwise, in our view, the time to file a criminal complaint is after all assets have been stripped from a rogue. Fraud victims who put their trust and confidence in the criminal justice system to recover on their losses take a significant risk, as the criminal justice system does not prioritize recovery for victims. Criminal complaints are for what we refer to as “lost cause frauds”.

Fraud victims in Canada should view the criminal justice system in Canada as preoccupied with a rogue’s Charter rights, a rogue’s rehabilitation, and keeping the incarceration rate in Canada low. Most rogues in Canada, if convicted, are released after serving 1/6th of their sentence. In the aftermath, most fraud victims feel they did not receive “justice” through Canada’s criminal system.

In our view, fraud victims are better off in Canada’s civil justice system. This recent decision in Ontario v. Madan, 2020 ONSC 8093 supports our views.

The Madan Family Fraud on the Ontario Government

The Ontario government operated a program known as “Support for Families” (“SFF”) with the goal to defray costs of at-home learning through one-time payments of $200 or $250 per eligible child.

These assets include the proceeds from the Madan’s sale of a property at 5 Deerling Crescent, North York. Sanjay Madan had purchased the Deerling Property on January 12, 2016, and sold it on September 29, 2020, before the Mareva injunction was issued.

$911,486.32 from the sale of the Deerling Property was held in the trust account of the real estate lawyers at the time the Mareva injunction was issued. The Ontario government accepts for now that these proceeds are not tied to the proceeds of the alleged fraudulent SFF program scam.

On December 16, 2020, Sanjay Madan brought a motion to vary the Mareva injunction to grant him and his wife, Shalini Madan, and their two sons Chinmaya Madan and Ujjawal Madam access to funds to retain criminal and civil counsel, and to fund their personal lives.

The Madam family sought $7,000 per month for “home”, “utilities”, “car”, “internet/phones”, and “groceries and food.” The Madam family further sought $591,600 to pay retainers to criminal counsel and a further $315,270 to pay civil counsel, including the cost of this motion.

The Ontario government opposed the motion on the basis that the Madan family had not discharged their onus to show that they have no assets, other than the frozen assets, available to pay their expenses.

On December 24, 2020, Justice Dietrich in Toronto dismissed the Madam family’s motion. The Court held that the Madam family had not disclosed whether they had other assets in Ontario for which to pay for the legal counsel and personal expenses.

In Canada, those accused of fraud can apply to a Court to obtain funds frozen by Court order after a fraud is proven to a prima facie (obvious on its face) standard. Funds are frozen by a Court on the basis that if the funds are not frozen, the victim will not have an asset to recover from after obtaining judgment.

In other words, the Courts in Canada should protect fraud victims’ recovery interests by not issuing paper judgments when a fraud victim has demonstrated after a claim is issued and before a judgment is ordered that those they accuse of being rogues have assets which could be dissipated before judgment. The Courts infer a rogue’s intention to dissipate funds or judgment-proof themselves from the prima facie fraudulent conduct.

The legal test that those accused of fraud have to meet to gain access to their frozen funds was originally set out in a 2003 case known as Canadian Imperial Bank of Commerce v. Credit Valley Institute of Business and Technology, 2003 CanLII 12916 (ONSC)[3]. Those accused of fraud are required to prove:

What makes the CIBC v. Credit Valley decision controversial is that the Court then went on to state that if those accused of fraud still have no funds for legal and living expenses, that they can still ask the Court for access to frozen funds derived from the victim!

The rationale for this decision is that the risk of an accused person being wrongfully convicted for fraud justifies allowing the accused person to access the victim’s funds to fund their criminal lawyers.

This rarely occurs and did not take place in the case with the Madans. The reason that rogues rarely get access to a victim’s funds for their own personal and legal expenses is because they first have to make full financial transparency: Trade Capital v. Peter Cook, 2015 ONSC 7776, at para. 41.

Reasons for the Dismissal of the Madan’s Motion

In the Madan case, the Ontario government was given the opportunity to cross-examine the Madan family on their affidavits reporting their income and assets and investigate whatever they testified to. If the Madan family refused to answer questions about their assets and income, a negative inference may be drawn, and they will not be given access to the frozen funds: Waxman v. Waxman, 2007 ONCA 326, at para. 39.

In the Madan case, a number of corporate defendants were named: Intellisources Inc., Newgen Solutions Inc., 10583570 Canada Ltd., Vidhan Singh and Wang & Associates Professional Corporation. The full transparency test includes all income and assets of a corporation which the accused has an interest in: International Offtake Corp. v. Incryptex Ltd., [2017] OJ No. 6600 (SCJ), at para. 44.

The Madan family filed three affidavits in support of their motion to access funds frozen by the Mareva injunction. None of these affidavits describe any of their assets outside of Ontario. One of the Madan family affidavits alleged that they have not used any of their assets in Ontario since the Mareva injunction was issued. The Ontario government demonstrated that this statement was false – and that Surjay Madan had withdrawn $84,000 from a CIBC account, and had squirrelled between $21,000 to $30,000 of it in India via a cash smuggling operation with overseas relatives.

Only one of the three defendants – Sanjay Madan, filed an affidavit in support of the family’s motion. Shalini Madan, Chinmaya Madan, and Ujjawal Madan offered no evidence whatsoever in support of their request for access to the frozen assets which would justify a grant of legal or living expenses to them. For this reason alone, their motions were dismissed.

Justice Dietrich went on to find that Chinmaya Madan is employed at Microsoft in the United States and owns two condominiums, one of which is rented out. Chinmaya has provided no information regarding rental income from these condos. Chinmaya’s annual salary, estimated to be between $130,000 to $140,000 USD, is deposited into Chinmaya’s bank account and is not subject to the Mareva injunction nor the preservation order.

Justice Dietrich also went on to find that Ujjawal Madan is a graduate student in the U.S. He also has a U.S. bank account, which is not subject to the Mareva injunction nor the preservation order.

This blog and its predecessors are not intended to be read as a condemnation of the Canadian criminal justice system. These blogs are published to underline to fraud victims that the criminal justice system is not a reliable legal system to recover on their losses. If fraud victims prioritize recovery of their lost funds over seeking punishment of the rogue, they should at a minimum file a claim within two years of discovering their loss as required by the Limitations Act, SO 2002, c.24.

In our view, fraud victims are well advised to not file criminal fraud complaints until after judgment and recovery is obtained through the civil courts if the victim’s priority is recovery over that of seeking retribution and punishment for the offender. There is no limitation period on the filing of criminal complaints. The filing of criminal complaints is best left until after everything that can be recovered from a rogue and his or her co-defendants is obtained.

To state otherwise, it is when recovery has been completed that it is worthwhile for fraud victims to consider punishment by way of filing a criminal complaint. If recovery is complete and the rogue still has assets, consideration should be given to seeking civil punitive damages, as fraud victims will find that the criminal justice system puts the “welfare of society” (which includes the welfare of rogues and punishing police through Charter cases) ahead of them.

In our view, criminal complaints should be relegated to “lost cause frauds” – that is frauds which either cannot be funded by a victim or frauds for which there is no reasonable prospect of recovery. If rehabilitation of offenders and the safety of the public is secondary to Charter rights and other social welfare objectives of the criminal law, why should fraud victims support it other than for the purpose of retribution?

Mining Technologies International, Inc. v. Krako Inc., 2013 ONSC 7280,[4] is one of our firm’s cases. We had proven our victim lost $2M in an investment fraud. A UK based rogue named Zia Shlaimoun brought a motion to vary a Mareva injunction. The Court held that the onus was on Mr. Shlaimoun to prove proprietary (the victim’s) versus non-proprietary (Shlaimoun’s) funds were in a commingled account (paras 217 to 218). A full recovery was made by our clients in this case.