What Fraud Victims Should Know About Investigation Report Privilege Waiver 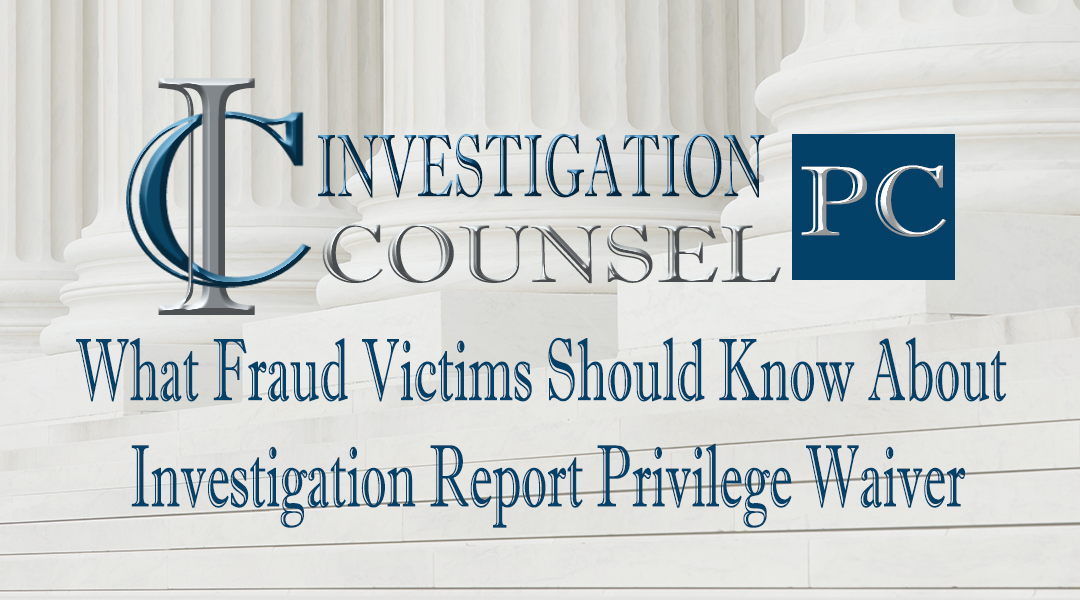 Pleading fraud is a more specialized task than pleading other kinds of allegations. According Rule 25.06 of Ontario’s Rules of Civil Procedure, fraud must be pleaded with particulars of material facts due to the serious nature of the allegations. This is a topic we at Investigation Counsel PC have written about previously. You may access that blog post here.

This blog summarizes a recent decision of the Ontario Superior Court of Justice which assists lawyers to succinctly and adequately plead material facts relevant to fraud claims without risking litigation privilege to communications such as investigative reports. It is an issue that we come across regularly in pleading fraud cases. It is also an issue investigators should be aware of as the contents of their investigation reports are at risk to be exposed, which may lead to complications for the investigators.

In this blog, we discuss the dangers of making reference to investigation reports in a fraud pleading. This issue was addressed by the Ontario Superior Court last year in the case of TTC v. MVD Law PC et al. 2018 ONSC 2611 (May 2, 2018). This case was relevant to our practice as it was one of our investigation reports that was the subject of the claim for production by the defendant law firm.

The TTC alleged that MVD Law PC was involved in submitting falsified documentation in support of personal injury claims against the TTC to TTC Insurance, which resulted in TTC Insurance making payments to MVD Law PC for the false injury claims. The false documents relied upon by the TTC to make payments to MVD Law PC included receipts for caregivers, housekeepers and other service providers—services which these providers state they never provided, and which the claimants state they never received. The TTC’s theory was that MVD Law PC was pocketing funds based on false documents they generated.

MVD Law PC argued that, because the TTC pleaded facts regarding the TTC’s audit and investigation, that the TTC should be required to produce all documents in their possession regarding the audit and investigation so that MVD Law PC could review them and make full answer and defence. MVD Law PC submitted that such a disclosure requirement is appropriate because the TTC had sued them for fraud, conspiracy, and breach of trust. MVD Law PC relied on the case of Timminco Ltd. v. Asensio, [2009] 95 OR (3d) 547 (ONSC), at paragraphs 16 to 20.

One of the alleged purposes of MVD Law PC’s production request was to determine when the TTC discovered that it had made a payment based on false information in each of the 13 claims. According to Ontario’s Limitations Act, once someone discovers that they were defrauded or wronged, they have two years to issue a Statement of Claim. The TTC alleged that it was during its handling of the 13th claim that its suspicions were raised and it began the audit, and that this discovery triggered the discovery clock for the 13th claim as well as the prior 12 claims. MVD Law PC submitted that the TTC could have, on an objective standard, discovered the alleged losses for the prior 12 claims earlier and, accordingly, those claims were statute barred in Ontario.

The specific documents sought by MVD Law PC from the TTC’s list of privileged documents included the independent law firm report (which we prepared), private investigator reports containing witness statements, and forensic handwriting analysis reports. The dates of these reports were also listed by the TTC in their privileged document list and, accordingly, arguably were not needed for determining a discovery date. The documents, however, were mentioned by way of general terms of “audit and investigation” in the Statement of Claim.

The Court held that privilege is more than a rule of evidence, but a fundamental civil and legal right. Privilege can be waived, however, either explicitly or implicitly. When privilege is waived, the waiver applies to the entire subject matter of the communications or document. In other words, a party cannot cherry pick to waive only one aspect of a document and keep the rest protected. A party may implicitly waive privilege by disclosing a once-privileged document, or by verbally disclosing the substance of a once-privileged communication. Important to this case, is that privilege is also implicitly waived by pleading reliance on a privileged communication to support a substantive position taken in a legal proceeding.

The Court distinguished between the reliance on a privileged document to support a material fact, which does result in a waiver of privilege, and the mere mention in a pleading that legal advice was sought, obtained and relied upon which does not give rise to a waiver of privilege. The line is often difficult to determine. The onus is on the moving party to prove waiver of privilege: Guelph v. Super Blue Box Recycling Corp., [2004] 2 CPC 6th 276 (ONSC).

The bottom line in this case was that the TTC relied, for the purposes of supporting its fraud claim, upon audit and investigation reports that it had received. This was held to be a substantive and material fact. The mere mention of the reports was all that was necessary to support the finding of waiver of privilege generally. The pleading did not mention the specific date of a specific document. As a result, the TTC was required to produce the audit and investigation reports it had claimed were confidential.

Another take away from this case is that same approach regarding implicit waiver of privilege has been taken in the context of communications referred to in expert reports: Ebrahim v. Continental Precious Minerals, 2012 ONSC 1123. For further strategic information on fraud investigation and litigation issues, we encourage you to review our other published blogs

At Investigation Counsel, we investigate and litigate fraud recovery cases. If you discover you are a victim of fraud, contact us to have your case assessed and a strategy for recovery mapped out before contacting police or alerting the fraudster. We also promote victim advocacy and academic discussion through various private and public professional associations and organizations. If you have an interest in the topics discussed herein, we welcome your inquiries.