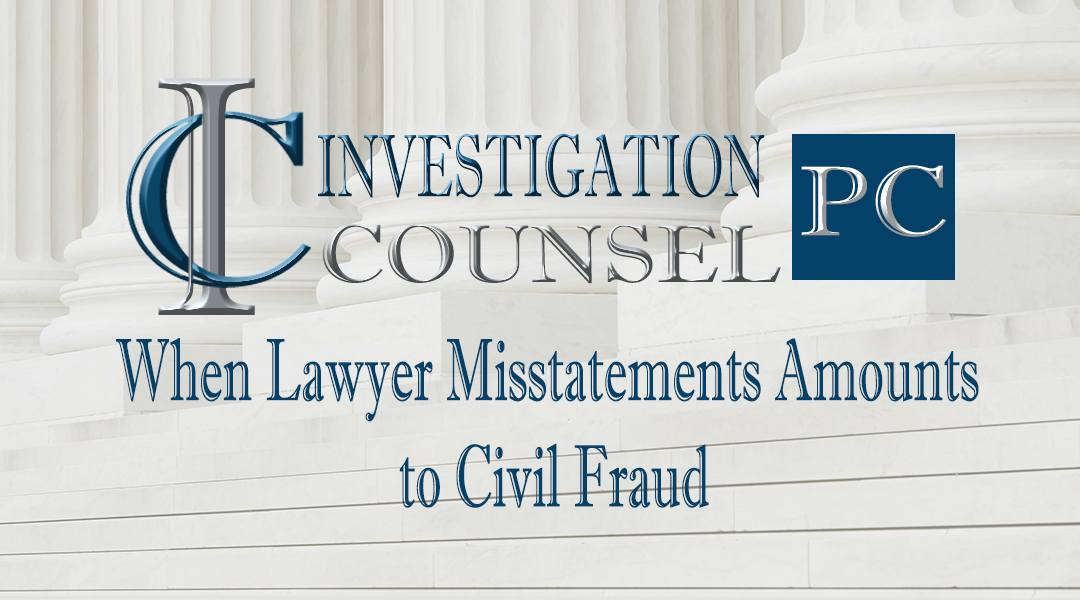 This blog summarizes a recently published decision from the Ontario Court of Appeal which somewhat clarifies the where the line is drawn between a lawyer’s fair and zealous advocacy for their client and their liability for civil fraud for deceiving the Court and opposing counsel with false statements.

In our fraud recovery litigation, from time to time, we encounter lawyers for alleged fraudsters who make positive statements on behalf of their clients with the intention of having the court and opposing counsel rely the statements as if they are honest. In other words, we deal with lawyers who seek to give the impression that, by virtue of their profession, their statements not supported by evidence are honest and they not being used as a tool by the client to dupe the Court.

As an example, we recently dealt with a rogue’s lawyer who advised the Court, in the context of a civil contempt proceeding against the rogue, that an adjournment was necessary because the rogue was in police custody and therefore attend court. In fact, this lawyer’s statement to the Court was not true. This false statement was made after the lawyer was aware of his client’s long criminal record for fraud and breached orders to attend court, and after the lawyer was aware that his client had lied to the Court on numerous occasions in prior civil contempt proceedings.

In the example discussed above, the issue became whether the rogue’s lawyer should be personally liable for costs. The lawyer made similar false statements at the subsequent contempt hearing based on his rogue client’s unverified information, and then filed an affidavit with false information sworn by the rogue in yet a third adjournment attempt in the same contempt proceeding. This behaviour, in the absence of due diligence, raises the issue of how far will a Court let a lawyer go with making false statements before a sanction will be imposed.

The Court of Appeal in Paulus v. Fleury, 2018 ONCA 1072 provides some insight into this issue.

On February 20, 2018, the motions judge in Paulus v. Fleury ruled that statements made by the plaintiff lawyer to defence counsel at a pre-trial to induce a settlement in a personal injury action amounted to civil fraud, and based on this finding the Court set aside a settlement for $850,000 agreed to at the pre-trial. The Plaintiffs appealed the decision that their lawyer engaged in civil fraud, and sought an order to enforce the settlement.

On December 21, 2018, the Ontario Court of Appeal overturned the finding that the plaintiff lawyer’s statements to defence counsel amounted to civil fraud, and held the settlement reached at the pre-trial was enforceable. The Ontario Court of Appeal relied on the recently released Supreme Court of Canada decision in Groia v. Law Society of Upper Canada, 2018 SCC 27, to conclude that a lawyer does not engage in misconduct if he or she acts on his or her client’s information in good faith.

The facts in Paulus v. Fleury pertain to a garden variety motor vehicle accident. At the pre-trial conference, plaintiff counsel advised the Court, defence counsel, and the defendant adjuster that the plaintiff would call third party witnesses who were “independent” and “good, solid witnesses.”

In reliance on the character of the third party witnesses, and for other reasons, the defendant agreed to settle. Subsequent to settlement, the defendant learned that the witnesses the plaintiff lawyer had referred to were not independent, and were not likely to be credible. The defendant

asked the Court to set aside the settlement based on “false representations of counsel [that] would create a real risk of clear injustice to the defendant” (para 34).

The motions judge relied on the test for civil fraud as set out by the Supreme Court of Canada in Hryniak v. Mauldin, 2014 SCC 7, at para. 87, and held that:

The motions judge further held that the plaintiff lawyer was bound by the doctrine of honesty and good faith in contractual dealings as declared by the Supreme Court in Bhasin v. Hrynew, 2014 SCC 71. In other words, if one choses to make a statement, it must be an honest statement in the context of contractual dealings.

The motions judge stated “it is obvious that counsel have a duty not to lie or make knowingly misleading factual statements” and that this duty is owed to both the Court and to opposing counsel (paras 58 to 59). The motions judge acknowledged that an opposing lawyer is not obligated to disclose weaknesses in his client’s case, but if a lawyer raises an issue, then the statements he or she makes must be honest (para 62).

The Court of Appeal noted that the motions judge did not have the benefit of Groia v. Law Society of Upper Canada, 2018 SCC 27, at the time he heard the motion. Groia is relevant because of its discussion regarding a lawyer’s duty of resolute advocacy on behalf of a client. That duty is relevant to an assessment of whether submissions by counsel amount to civil fraud.

In Groia, the Supreme Court held that the fact that a lawyer is mistaken is not a basis in itself for a finding of misconduct. Where counsel challenges opposing counsel’s integrity, that challenge does not amount to professional misconduct if the allegations are reasonably based and made in good faith, even if counsel is mistaken (para 12).

In Groia, the Supreme Court further held that the impact of an accusation of professional misconduct could so severely affect the reputation of the recipient lawyer that it is appropriate to require both good faith and a reasonable basis for the allegation. The Court stated:

The Court of Appeal noted that a lawyer’s duty of resolute advocacy has limits. As Rule 5.1-2(e) of the Law Society of Ontario’s Rules of Professional Conduct indicates, when a lawyer is acting as an advocate, he or she shall not “knowingly attempt to deceive a tribunal by offering false evidence, misstating facts, presenting or relying upon a false or deceptive affidavit, suppressing what ought to be disclosed, or otherwise assisting in any fraud, crime, or illegal conduct.”

When do False Statements by Lawyers Amount to Civil Fraud?

In Paulus v. Fleury, the Court of Appeal held that a factual misrepresentation by counsel in judicial proceedings could amount to deceit or civil fraud when, for example, counsel tender a forged cheque as evidence of payment of a debt knowing the cheque was a false document. “In those circumstances there would be no reasonable basis for the factual assertion; nor could it be said that the statement was made in good faith” (para 30).

The bottom line in the Paulus v. Fleury decision was the Court of Appeal’s observation that mistakes by lawyers are a “frequent occurrence”. Counsel may lose credibility with the Court and their colleagues if they are not scrupulously careful about factual assertions, or if they advance arguments with no reasonable foundation, but these should not amount to civil fraud in this context unless there is neither a reasonable basis for the statements nor a good faith belief in their accuracy (para 29).