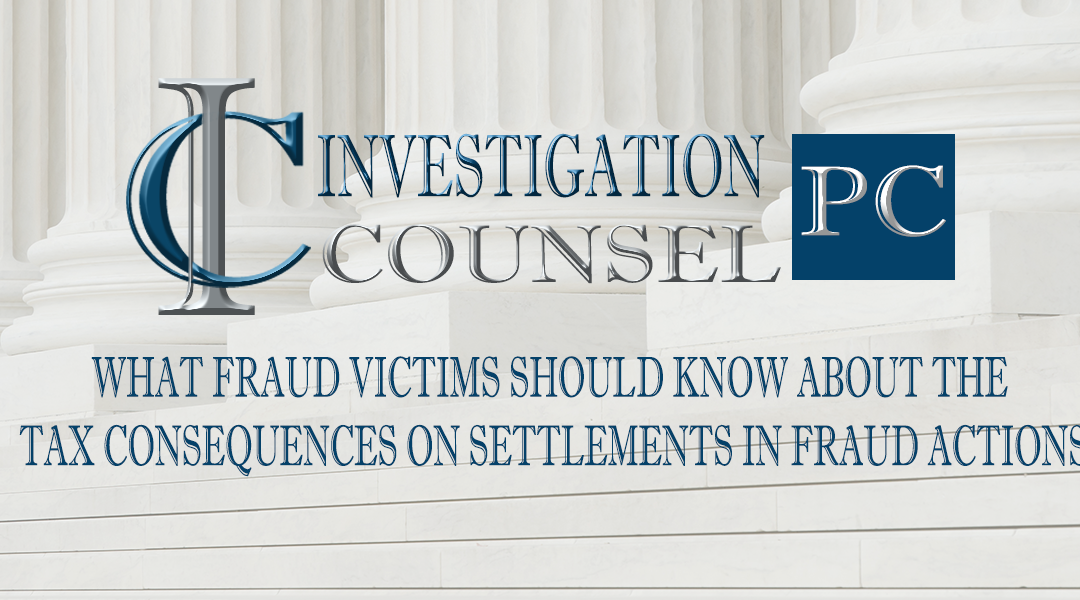 At Investigation Counsel PC, we are often asked by victims of fraud for advice with respect to negotiating settlements in fraud actions. To state the obvious, fraud victims often have a well-founded skepticism that the defendant they settled with cannot be trusted to fulfill their settlement obligations honourably.

In 2018 we acted as counsel for Kuwait investors who lost $1.8M to a British Columbia based business associate. At the eve of trial, a $2.7M settlement was reached. Thereafter the defendant attempted to renegotiate the settlement, alleging the victims owed tax to the Canadian Revenue Agency, so that he could obtain a tax credit. This is their story.

On August 16, 2018, the Supreme Court of British Columbia released its decision in Al-Thamer v. Bakhtiyari, 2018 BCSC 1526, on the issue of whether a defendant may be permitted to withhold part of a settlement payment to pay potential tax liabilities to the Canada Revenue Agency (“CRA”), as opposed to making full payment to his victims. The Court held that an alleged rogue cannot withhold part of a settlement to obtain a tax credit from the CRA if he fails to provide an accounting for the allegedly defrauded funds.

The Investment and Resulting Litigation

On May 6, 2015, the Plaintiffs, investors from Kuwait, filed a claim against the defendants Shirvan Elyassi Bakhtiyari (“Bakhtiyari”) and his company 415185 B.C. Ltd. (415 BC Ltd.”) seeking general and punitive damages for fraud, breach of trust, breach of fiduciary duty, unjust enrichment, conversion and conspiracy. In addition, the Plaintiffs sought an accounting of their funds from the Defendants.

In their Statement of Claim, the Plaintiffs alleged that in the 1990s they transferred $1.8M to Bakhtiyari and his company in exchange for a beneficial interest in some land that 415 BC Ltd. owned in Delta, British Columbia. The Plaintiffs alleged that the property increased in value well in excess of the $1.8M they paid, that Bakhtiyari refused and failed to provide them an accounting of what he used their money for, despite their repeated requests, and that he had dishonestly converted their funds for his own use or that he had pocketed the increase in value of the property.

On January 22, 2018, on the first day of a trial scheduled for four weeks, the parties participated in a day-long mediation and settled the Plaintiffs’ claims. The Minutes of Settlement included the following terms:

On January 25, 2018, Bakhtiyari delivered, by personal cheque, the first instalment of $1M to counsel for the Plaintiffs.

The essence of Bakhtiyari’s reasoning was that if a CPL had been issued, this implied the Plaintiffs had made a capital gain of $900,000 (the settlement of $2.7M was $900,000 more than the Plaintiffs’ original $1.8M investment). The alleged rogue Bakhtiyari suggested, post settlement, that as the Plaintiffs were not Canadian citizens, it was his civic duty to ensure the Plaintiffs paid tax to the Canadian government.

Bakhtiyari advised the Plaintiffs that his proposed withholding could be avoided if:

It appeared to the Plaintiffs that Bakhtiyari was seeking to obtain a tax credit on the Plaintiffs’ money that he never provided an accounting for. In response to Bakhtiyari’s demands, the Plaintiffs brought an application seeking an order requiring Bakhtiyari to pay the sum of $1,750,000 in accordance with the terms of the Minutes of Settlement.

Bakhtiyari in turn filed a cross-application seeking an order that he pay to the Plaintiffs only $1,062,500 and remit the balance owing, being $687,000, to the Receiver General. Bakhtiyari also sought an order releasing the CPL against his Delta Property.

The Submissions of the Parties

Bakhtiyari submitted that s. 116(5) of the Income Tax Act required him to withhold 25% of the funds and remit these funds to the CRA because the property was purchased with funds from a non-resident. Bakhtiyari further submitted that the CRA should ultimately determine if any tax was owing, and that pursuant to s. 227(1) of the Income Tax Act, he was not in breach the Minutes of Settlement due to his obligation to withhold funds from a non-resident and remit to the CRA.

Bakhtiyari referenced a number of cases including Fieguth v. Acklands Ltd. (1989), 1989 CanLII 2744 (BC CA), 37 B.C.L.R. (2d) 62 (C.A.) which concluded that where there had been a binding settlement agreement, deductions in accordance with the Income Tax Act were required by law. Notwithstanding that Fieguth v. Acklands Ltd. was a wrongful dismissal case which dealt with tax principles germane to employment scenarios, Bakhtiyari submitted that these principles were applicable and were utilized in a contract case: Geraghty v. Halcyon Waterspring Inc. (1999), 32 C.P.C. (4th) 152 (Ont. Gen. Div.).

The Court held that the terms of the Minutes of Settlement were clear: the Plaintiffs explicitly agreed at Term 12 to be responsible for any tax implications.

The Court further held that per Term 13 of the Minutes of Settlement, the parties agreed there was no finding that the $1.8M the Plaintiffs’ paid to the Defendants 25 years earlier had actually been invested into the Delta property as was supposed to have occurred.

The Court further held that notwithstanding that the Defendants had not provided any evidence that the Plaintiffs’ money had been invested as represented, Term 10 of the Minutes of Settlement declared that there was no admission of liability by the Defendants, and that the settlement was a compromise of a disputed claim.

The Court rejected Bakhtiyari’s suggestion that the taxes owing would be $687,000, or 25% of $2.7 million that he sought to withhold. The Court found that the Plaintiffs invested $1.8 million; received $400,000 in returned capital prior to the litigation, and paid $450,000 in legal fees. Accordingly, the capital gain, if any, was approximately $500,000, implying the potential taxes would be significantly less than the amount alleged by Bakhtiyari.

With respect to any potential capital gain, the Court found that the settlement amount reflected payments for compounded pre-judgment interest and other legal expenses—not the profit derived from any investment in land. On this basis, the Court held that there was no capital gain at all in the circumstances of this matter. The Court granted the Plaintiffs’ application and dismissed Bakhtiyari’s cross application.

However, because none of the settlement funds were identified as pertaining to any specific cause of action, and because the parties expressly agreed that there had been “no admission of liability by the Defendants”, and because the settlement was “a compromise of a disputed claim”, the Court looked to the intent of the parties to see if any allocation towards a capital gain was intended.

The Court cited Schwartz v. Canada, 1996 CanLII 217 (SCC), [1996] 1 S.C.R. 254, where the CRA sought to tax a settlement amount received by a departing lawyer from his firm as a “retiring allowance”. There was no evidence that any part of the settlement was allocated to a “retiring allowance”. The Supreme Court of Canada found that, there being no such evidence, the amount was not taxable. The Court said at para 41:

Logically, the Minister should not have the burden of presenting, in every case where the apportionment of a general award is at issue, specific evidence amounting to an explicit expression of the concerned parties’ intention with respect to that question. However, there must be some evidence, in whatever form, from which the trial judge will be able to infer, on a balance of probabilities, which part of that general award was intended to compensate for specific types of damages. [Emphasis in original.]

Similarly, in this case the Court found that the parties’ settlement was a calculated business decision which was intended to free the Defendants from the consequences of litigation and not strongly related to the value of the Plaintiffs’ claims. Bakhtiyari agreed to pay the settlement amount without admitting liability and without agreeing that the Plaintiffs had any interest in the land.

What this case essentially stands for is the importance of drafting Minutes of Settlement that considers the tax consequences of the deal. Here, the intent of the parties was that the funds were compensation for general damages, legal fees, disbursements, and pre-judgment interest. There was no evidence that the Defendants invested the Plaintiffs’ monies in the Delta property. The result was that Bakhtiyari could not obtain a tax credit on funds he refused to account for.