What fraud Victims Should Know about Loans versus Investments 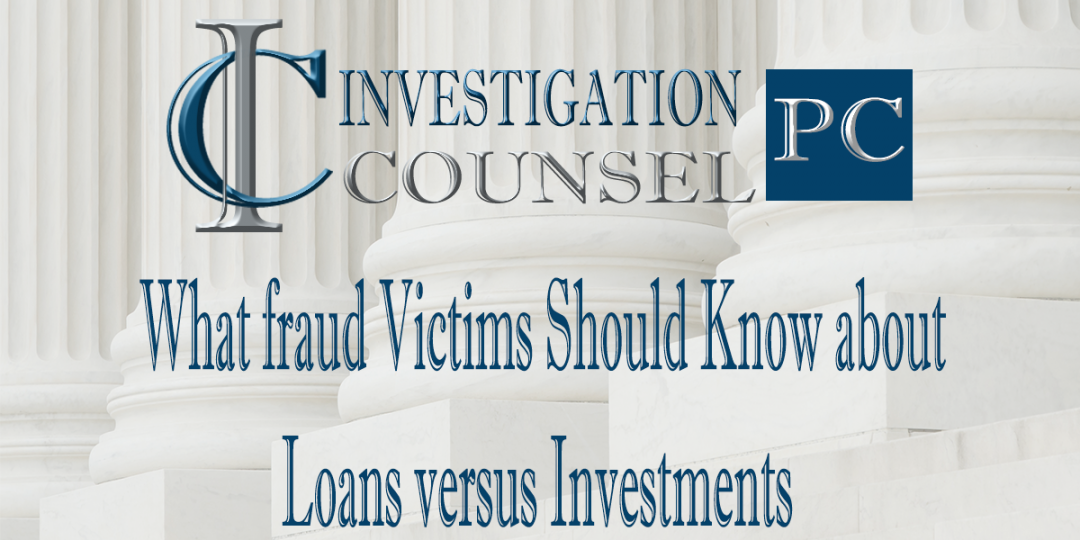 Liability of Agents in Loan Transactions

In cases where fraud is not alleged and where only breach of contract is asserted, whether a transaction is characterized as a loan or an investment can be critical to whether judgment will be issued. If a transaction is viewed as an investment where the investor took on the risk, there may be no cause of action. If the transaction is viewed as a loan, the lender may have a case.
In cases where dishonesty by deceit or omission of material facts is used to obtain funds for either a loan or an investment, the distinction between loan or investment is not critical, as dishonesty by statement or omission of material facts is a basis to set aside either type of transaction, even if the borrower is an innocent victim of fraud perpetrated by another rogue – see: R. v. Andersen, 2017 BCSC 1942.
This blog summarizes why the distinction between specific purpose loan and investment is important, and whether judgment can be obtained against an agent of the borrower.

The Case of Malik v. Ahmad

The case of Malik v. Ahmad, 2016 ONSC 6456, tells the story of an investment loan gone bad. The plaintiff Asim Malik (“Malik”) and the defendant Muzaffar Ahmad (“Muzaffar”) were good friends. The worked together in a restaurant. In the context of that relationship, Muzaffar had approached Malik to ask if he would lend him and his father Anser Ahmad (“Anser”) money in exchange for a “healthy return”.
Muzaffar stated that his father would invest the money in a company operated as BelSha Investments Ltd. BelSha Investments was operated by Anser’s relative Yasir Shad.[1] Muzaffar advised Malik that he and his father would personally guarantee the return of the money with a “profit”.
Based on these representations, Malik advanced $75,000 to Muzaffar. Anser ultimately received those funds through Muzaffar. There was nothing in writing between Malik and the Ahmads about the nature of the transaction at the time it was made.
After the term date for the return of the money had passed, Muzaffar told Malik that the money that he and his father had borrowed from him had been lost. Anser advised Malik that he had invested funds totaling $530,000 with Mr. Shad of BelSha Investments Ltd., and that he was a victim of an investment scheme.
Muzaffar told Malik not to worry as he and his father would repay him in full. Muzaffar signed a document promising to pay Malik. Anser repaid $22,300 of the $75,000 originally transferred by Malik to Muzaffar. Further repayments were not made. Litigation ensued.
Malik brought his action against the Ahmads alleging his funds were advanced to them as a loan to them personally, not as an investment into BelSha Investments Ltd. The Ahmads defended by alleging that Malik transferred his money to them not as a loan, but as an investment with no promise of repayment.

After the close of pleadings, Malik brought a motion for summary judgment. Motions for summary judgment in Ontario are to be granted whenever there is no genuine issue requiring a trial: Rule 20.04(2)(a) of the Rules of Civil Procedure. There will be no genuine issue requiring a trial where the judge hearing the motion is able to reach a fair and just determination on the merits.
The hard issue in the present judicial climate in Toronto is whether there is a genuine issue requiring a trial. The Court in this case held that judges must consider Rule 1.04 which provides that the Courts must liberally construe the Rules in order to secure the just, most expeditious and least expensive determination of a civil proceeding on the merits.
As part of his evidence to determine whether a genuine issue in dispute existed, Malik relied upon Anser’s repayment as evidence that the Ahmads knew the funds were a loan. He also relied on conversations he had with Muzaffar before he advanced funds, as well as various documents and promises from the Ahmads thereafter.
As part of his evidence, Muzaffar stated that he had no knowledge about Yasir Shad’s BelSha Investments Ltd. business. Muzaffar stated that his role in the transactions was to pass communications between Malik and his father. For this reason Muzaffar took the position that he did not admit to personally owing Malik any money and should not be liable.
The Court held that the facts of this case were not complex and that summary judgment is not only intended to provide a greater access to justice, but also to enhance the opportunity of parties to a civil action to achieve a result on a more timely and affordable basis. The Court held that this case was well suited for adjudication on the merits as a motion for summary judgment.
The Court further held that the parties were expected to put their best foot forward on the existence or non-existence of material issues to be tried. The parties are assumed to have filed all evidence on the motion that could be called at a trial. The evidence as a whole is expected to allow a judge to make the necessary findings of fact or to draw reasonable inferences that the evidence would support, and to evaluate the credibility to decide the core issues: Rule 20.04 (2.1).
The Court held that the core issue was whether the funds advanced by Malik to the Ahmads was a loan, and if so, whether both Muzaffar and Anser were required to repay it. The Court found as a fact that Muzaffar was acting as an agent for his father when he approached Malik to invest money, and that Muzaffar approached Malik to obtain money for his father to invest in Mr. Shad’s BelSha Investments Ltd. business.
On the ultimate issue of loan versus investment, the Court held that the evidence proved that the funds advanced by Malik to the Ahmads was a loan, not an investment. This was in large part because Anser repaid $22,300 of the $75,000 to Malik. The repayment demonstrated that the Ahmads viewed that their transaction as a loan, despite their transaction with BelSha Investments being an investment. There is no reported case of the Ahmads against BelSha Investments.
The Court granted judgment in the amount of $52,700.00 against Muzaffar and Anser jointly and severally. This case is an example that in cases of loans made without written agreements, getting some kind of payment back is necessary to make your case of loan as opposed to investment.

In April 2018, Muzaffar Ahmad was sentenced him to 15 months jail related to cheque scheme fraud. In his criminal sentencing, the Court found that Mr. Ahmad was a 51-year-old, first-time offender, born in Afghanistan and educated in Pakistan. He relocated to Germany for fifteen years before immigrating to Canada in 2000. Mufazzar Ahmad reported to the Court that in Canada he had always worked as a cook. He also volunteered at a mosque. It is unknown if Mr. Ahmad is appealing this decision. See R. v. Ahmad, 2018 ONSC 536.
At Investigation Counsel, we investigate and litigate fraud recovery cases. If you discover you are a victim of fraud, contact us to have your case assessed and a strategy for recovery mapped out before contacting police or alerting the fraudster. We also promote victim advocacy and academic discussion through various private and public professional associations and organizations. If you have an interest in the topics discussed herein, we welcome your inquiries.
[1] BelSha Investments is reported to operate from 41 Boticelli Way, Woodbridge, ON  M4H 0C8, 905-303-5399. Mr. Shad is reported to be a professional real estate investor – see: http://belshainvestments.com/ and http://www.happyhealthyandwise.me/testimonials/