What Fraud Victims Should Know About Civil Liability for Criminal Fraud 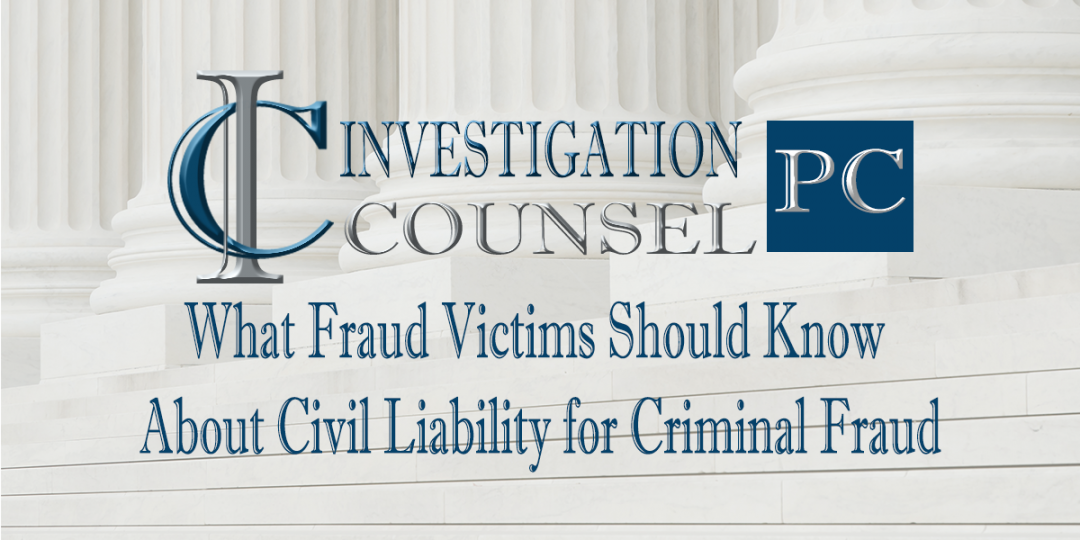 On March 7, 2018, Justice Dunphy of the Superior Court of Justice, Commercial List, in Toronto, issued his judgment in the case of Atlas Copco Canada Inc. v. David Hillier, 2018 ONSC 1588. In this case, the plaintiff Atlas Copco Canada Inc. had brought a motion for summary judgment against one of the defendants – Mr. Plate – for fraud, breach of fiduciary duty and conspiracy. The Court dismissed Atlas Copco’s civil fraud claim, even though Mr. Plate had already been convicted of fraud by a criminal court.
The question may be asked – how is that a civil court, where the standard of proof is the balance of probabilities, cannot find a defendant liable for civil fraud, when a criminal court, using the higher standard of proof (proof beyond a reasonable doubt), had convicted the same person of fraud based on the same conduct? The history of the concurrent civil and criminal cases was reported in Justice Dunphy’s decision as follows.

Dateline of the Criminal and Civil Cases

In the 1990s, Atlas Copco employee Mr. Paul Caron began creating inflated bills and fake invoices to the company for Manulife insurance benefits. Subsequent forensic accounting evidence proved that between 2004 and 2007 alone Atlas Copco was overbilled $22M+. Paul Caron’s primary co-conspirator was Leo Caron. Obviously the fraud was far greater than $22M, as losses were not assessed for the period prior to 2004.
In 1997, Mr. Plate (the subject of the summary judgment motion we are reporting on), was a general manager of Canadian operations for Atlas Copco. Mr. Plate was later promoted to vice-president of global operations. Initially Mr. Plate was not aware of Mr. Caron’s scheme.
In 2001 Mr. Plate became involved in the fraud scheme as alleged in the claim. At the time, the overbilling scheme was facilitated by three insiders at Atlas Copco. These insiders received kickbacks. Mr. Plate became one of the insiders. Mr. Plate’s rationalization was that the pension provided by Atlas Copco was insufficient. Mr. Plate’s involvement consisted of approving the conduct of Mr. Caron and not reporting the scheme to his employer.
In 2005 suspicious circumstances were discovered. Mr. Plate was suspended. In 2007 Mr. Plate’s employment was terminated. On June 14, 2008, the Statement of Claim in the civil proceedings was issued. Various ex parte (without notice) asset tracing and freezing motions were brought. Further facts were discovered exposing the true extent of the fraud.
On April 11, 2011, the Statement of Claim was amended. The claim sought judgment of $20M based on declarations that Mr. Plate was liable for fraud, breach of fiduciary duty, breaching his duties under section 122 of the Canadian Business Corporations Act, conspiracy and other torts. Atlas Copco also sought an order for tracing and an accounting, their costs and prejudgment interest.
The claim alleged that in the course of his employment Mr. Plate had been involved in a scheme with his co-employees to misappropriate funds by way of false advances and bonuses, approvals of illegitimate expense reimbursements, and inflating or creating false invoices. Atlas Copco alleged that Mr. Plate breached the duties he owed to the company by not reporting to Atlas Copco the fraud engaged in by his co-employees.
On January 11, 2010, Mr. Plate served his Statement of Defence. A criminal complaint was filed. The civil action then appears to have been stayed while the criminal investigation proceeded.
In October 2012, Mr. Plate was arrested and charged with criminal fraud and conspiracy. From 2012 to 2016 the criminal process unfolded with Crown disclosure and preliminary hearings. Various motions took place. Mr. Plate and his co-accused were committed to trial. It appears the civil case continued to be stayed.
In April 2016, the criminal trial of Mr. Plate commenced. The trial before a jury lasted ten weeks. On June 29, 2016, Mr. Plate was convicted of criminal fraud. On October 25, 2016, the criminal judge released his reasons for sentence.
In his reasons for sentence, the criminal court held that Mr. Plate “grossly betrayed the trust of his employer, as he was in the best position to stop the scheme, as he was aware of the means used by Mr. Hiller to conceal fake invoices”. Mr. Plate’s fraud was, for the most part, that of fraud by omission for failing to report material facts to his employer.
On October 26, 2016, Mr. Plate was sentenced to five years in prison. Mr. Plate was ordered to pay restitution in the amount of $1.5M – being the funds that he obtained in the $20M+ fraud perpetrated on his employer. As mentioned above, in the civil fraud case Atlas Copco sought judgment for $20M as against Mr. Plate.
Sometime in 2017 the plaintiff Atlas Copco brought a motion for summary judgment as against Mr. Plate. As is typically the case in Canada, fraudsters do not serve their full criminal sentences.

The Issues as Defined by the Civil Judge

Atlas Copco sought summary judgment on the basis of the findings of fact of the sentencing judge from the criminal proceedings. Justice Dunphy held that the main issue before him was the extent to which the findings of fact in the criminal proceedings can be relied upon to find the same defendant civilly liable for fraud based on the same complaint.
Justice Dunphy went on to hold that there is no question that the reasons for sentence of the criminal courts are relevant and admissible in a civil fraud case. The issue is weight that should be given to these reasons in the civil case. Justice Dunphy held that weight should be determined by:

It is unlikely that this decision will be appealed, but perhaps it should be. What Justice Dunphy did not explain in his judgment was that the term “false statement” also includes the omission or concealment of a material fact. Reference to other civil fraud cases is helpful.
The case of Harland et al v. Fancsali et al (1993), 13 OR (3d) 103, is a civil fraud case in which the defendant rogue did not make an explicit “false statement” to his victim, but rather omitted to disclose material facts which caused the plaintiff Harland a loss. Justice Ferguson held:
Many of the texts and cases are not very clear about the relationship and differences between a civil claim based on fraud and one based on deceit. It would appear that a remedy for fraud was originally only available in equity, but that in current theory it …[is] simply a tort for which the court will grant a remedy to restore the plaintiff to his original position or compensate him for any loss caused.
As a theory of liability, fraud is much broader in scope than deceit. There is no need to prove a false representation. Indeed, the courts have recognized that it is difficult, if not impossible, to define fraud because it is capable of being committed in endless forms and new forms continually arise: see Klar, Remedies in Tort, pp. 511-12.
Justice Montgomery reviewed the definitions of fraud in Ontex Resources Ltd. v. Metalore Resources Ltd. (1990), 1990 CanLII 6952 (ON SC), 75 O.R. (2d) 513 (Gen. Div.). Perhaps the most general definition he quoted was that “defraud” means to deprive a person dishonestly of something which is his or of something to which he is or would or might, but for the perpetration of the fraud, be entitled.
The arguments of counsel have made me sensitive to the risk of finding fraud based on conduct which might be considered by the general public or particular business groups as “sharp”, or “hardball” or aggressive or competitive conduct but not fraudulent.
To minimize that risk I shall turn to the Criminal Code provisions on the assumption that if conduct constitutes fraud under the criminal law it certainly constitutes a wrong for which a civil court can grant relief.
The Criminal Code, R.S.C. 1985, c. C-46, provides:
380(1) Every one who, by deceit, falsehood or other fraudulent means, whether or not it is a false pretence within the meaning of this Act, defrauds the public or any person, whether ascertained or not, of any property, money or valuable security,

As noted already, there need not be a false representation; it is sufficient if there is “fraudulent means”.
The criminal case law (R. v. Theroux, 1993 CanLII 134 (SCC), [1993] S.C.J. No. 42) has established the following propositions concerning the crime of fraud:
— “other fraudulent means” is a third category of conduct separate from deceit or fraud which includes what reasonable people consider to be dishonest dealing. The non-disclosure of important facts may fall into this category: R. v. Theroux, at pp. 25-26;
— although other fraudulent means have been broadly defined as means which are “dishonest”, it is not necessary that an accused personally consider these means to be dishonest in order that he or she be convicted of fraud (at p. 32).
It would seem that Mr. Plate was dishonest by not disclosing the fraud to his employer, thus implying that he should be liable for civil fraud as well as criminal fraud.

A Concise Summary of the Definition of Civil Fraud

The primary concern with Justice Dunphy’s ruling is that it does not seem held that a criminal fraud is defector a civil fraud. How can fraud by “other means” as defined by the Criminal Code not also be a civil tort? For those who hold fast to the five-part civil fraud test, it seems that the meaning of “false statement” must include omitted material facts. If it does not, the civil courts should declare a new form of civil fraud based on the test for fraud used in the criminal courts.
It is also worthy of note that the test for fraud used by securities regulators for securities fraud relies on the criminal test, and that often decisions of securities regulators cite criminal fraud cases for the elements of the test: Won Sang Shen Cho (Re), 2013 BCSECCOM 300. How is it that then that the test for civil fraud is narrower in scope than that for criminal or securities fraud?

The foregoing discussion may be more academic than real. Justice Dunphy went on to hold that Mr. Plate held a fiduciary duty to his employer, which he breached by failing to report the fraud that he knew was being perpetrated against his company. Based on this civil wrongdoing, Justice Dunphy gave judgment in the amount of $20M, being the maximum amount claimed by the Plaintiff as against Mr. Plate, even though the entire fraud was approximately $22M.

It is unknown if this case is now under appeal. The Court’s decision reported at Atlas Copco Canada Inc. v. David Hillier, 2018 ONSC 1588, is available online at:
https://www.canlii.org/en/on/onsc/doc/2018/2018onsc1588/2018onsc1588.html?searchUrlHash=AAAAAQAXQXRsYXMgQ29wY28gQ2FuYWRhIEluYy4AAAAAAQ&resultIndex=1

At Investigation Counsel, we investigate and litigate fraud recovery cases. If you discover you are a victim of fraud, contact us to have your case assessed and a strategy for recovery mapped out before contacting police or alerting the fraudster. We also promote victim advocacy and academic discussion through various private and public professional associations and organizations. If you have an interest in the topics discussed herein, we welcome your inquiries.